On Wednesday, June 22, Captain Jeff Brunelle found something unexpected in the mailbox at The Salvation Army Lynn Corps Community Center on Franklin Street. 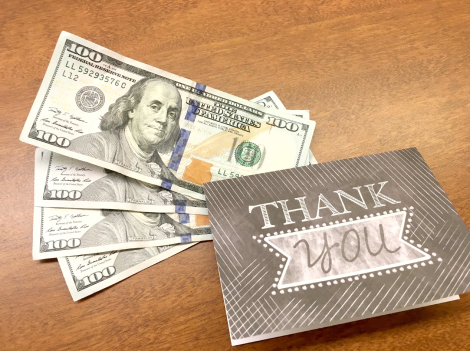 “There was no stamp on the envelope, so this was hand-delivered anonymously.” Brunelle explains. No one at the center saw who left the envelope. “The note was not signed and the person left no address.”

Inside, were four crisp $100 bills and a note that read:

“As a single parent raising a young child, I moved to Lynn to get a new start. Shortly after this, I became ill and became disabled for quite a few years. In my time of need, The Salvation Army was there for me and my family.

Brunelle immediately thought of the hundreds of children served by The Salvation Army’s after-school program and summer camp programs, which are just ramping up for the season.

“At The Salvation Army, we help people because they need it. We don’t expect anything in return,” Brunelle said. “The best thing about this note is that the family we helped is doing better today. The donation is incredibly generous and will be put to good use to help other families in their time of need.”

If you would like to match this donor’s generosity with a gift, you can donate online to our Lynn Corps Community Center.